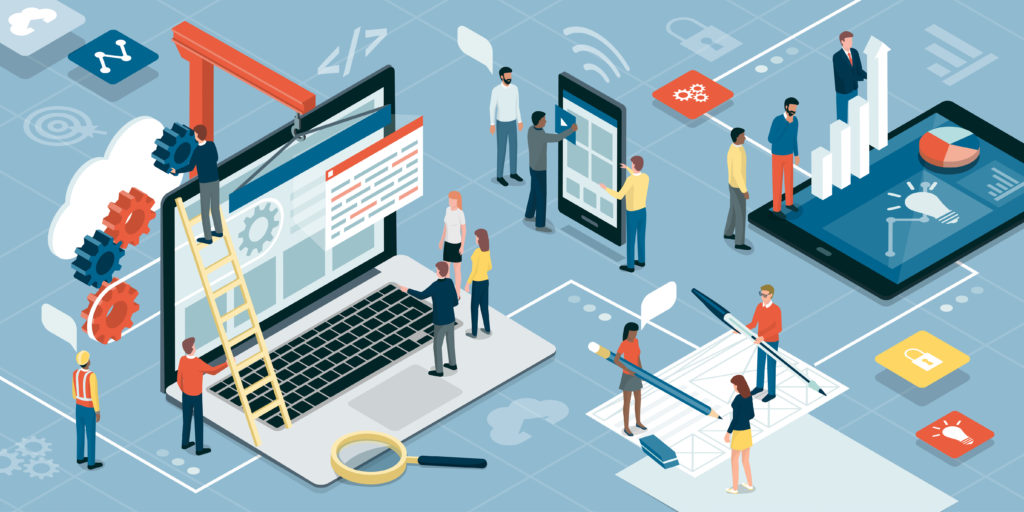 What are the main benefits of Angular software development?

Businesses can no longer afford slow web pages, faulty functionality in their mobile apps, and service interruptions in our digitally driven world. This is why modern web development targets all of these issues, and Google has maintained that Angular is one of the most trusted choices. With its efficient problem-solving approaches, Angular removes the extra code developers typically have to write by taking advantage of dependency injection and data binding, making the development process faster and more efficient.

From my experience working in a custom software development company specializing in Angular, I can see the many benefits this web development framework has to offer our enterprise customers. Keeping code clean, consistent, and easy to understand by all developers involved in a project is a number one priority, and that’s where Angular comes in.

What is the difference between Angular and AngularJS?

It all started in 2009 when Hevery and Abrons developed their first version of AngularJS, originally intended only to handle JSON files. The API quickly took a more general turn, and in late 2010 AngularJS moved to the GitHub repositories, with a deliberately open source status. However, soon after, Google largely overtook the project with the first “real” version of AngularJS, 1.0, released in June 2012. Two years later, a very different version now known as the simplified Angular , encompassing significant changes and a product rewrite.

AngularJS was a very popular framework for developing complex client applications, and Angular itself had a similar path to popularity. The origin of AngularJS goes back to JavaScript and Angular is based on Microsoft TypeScript, the modern version of which has been rewritten to be much more efficient and high traffic websites use it today.

Keeping in mind that Angular is the evolution of AngularJS, let’s see the most distinctive features of Angular:

The first step was to understand that AngularJS and Angular are two different products, each with their pros and cons. Now that we know what sets them apart, we can focus on the crucial benefits of Angular software development.

Why is Angular good for web development?

It provides the ability to create Single Page Applications (SPAs) so that changes are instantaneous, making the web application faster. This is achieved through the design based on reusable components, eliminating the need to continually reload the page. Angular developers just make components appear and disappear, directly increasing the speed and performance of Angular web applications. Another feature that makes Angular faster to run in the browser is that it generates code optimized for JavaScript Virtual Machines (JVMs).

Additionally, Angular delivers excellent and seamless performance on mobile devices, especially smartphones, regardless of screen size, interfaces, or hardware. Additionally, the native support for Angular mobile app development is fantastic and offers a high level of scalability. In 2021, with mobile traffic skyrocketing relative to desktop, it only makes sense for businesses to develop high-quality, reliable, and intuitive mobile apps.

Angular also comes with core modules and features that you’ll need to scale your projects and add additional components, services, or directives. Due to its outstanding performance, flexibility, scalability, and use of TypeScript, Angular is suitable for developing complex enterprise-level applications, e.g. weather forecasting, video streaming, gaming, etc

Cybersecurity has been a major topic throughout the pandemic as many businesses have suffered cyberattacks. In the digitized society we live in, it is natural for business leaders to aim to build secure software applications that are resistant to potential threats such as XSS attacks and HTTP vulnerabilities, by enforcing a content security policy (CSP ) and trusted types to prevent XSS attacks. Angular is also able to detect and fix errors faster to keep your applications and web pages secure.

Also, Angular treats any value as untrusted by default. So when developers insert a value into the DOM through a property, style, attribute, interpolation, class binding, or from a template, Angular quickly “sanitizes” untrusted values ​​in order to modify them and to secure them so that they can be inserted.

There are many development tools that coders can choose from when building your Angular project. For example, tools that facilitate code editing include Sublime Text and Aptana, which is also used to develop ReactJS and VueJS applications. In addition, the Angular Universal tool allows convenient rendering with third-party servers.

If the community plays a central role in your decision-making process, Angular shouldn’t grab your attention at first. Hold your judgment though, as the prevailing negative attitudes towards Angular are associated with the problematic version of Angular 1.0, which was difficult to learn. However, the modern version of Angular is simple, and most Angular developers actively share and use coding advice in specialized communities to find the right tools or bugs. Additionally, Google constantly releases updates to Angular and provides developers with round-the-clock technical support.

Biography of the author Aleksandrina Vasileva

Aleksandrina is a content creator at Dreamix, a custom software development company, and is passionate about innovative technological solutions that have a positive impact on our world. Her training in teaching, combined with interests in psychology, pushes her to share her knowledge. She is an avid reader and enthusiastic blogger, always on the lookout for the next inspiration.