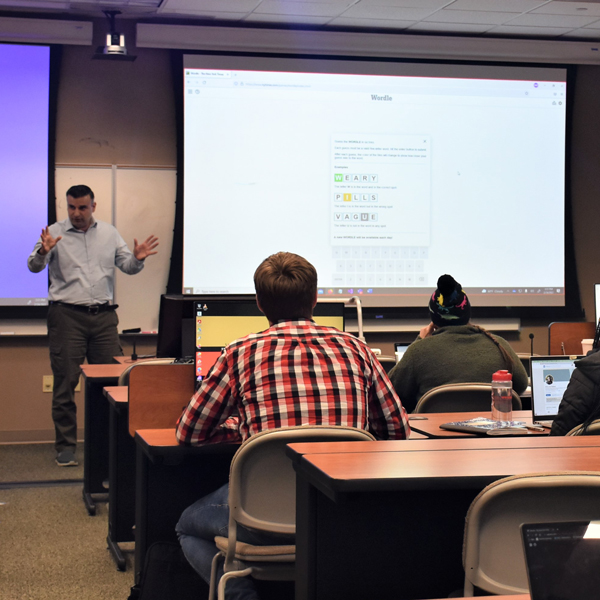 Amjad Nusayr, assistant professor of computer science at the University of Houston-Victoria, talks to UHV students about software development during a workshop in March. The workshop focused on the process of creating a digital game and app. The first workshop was based on the Wordle word game, and Nusayr plans to lead similar workshops over the next academic year for all UHV students and community members.

The first workshop, which took place in March, was based on the popular Wordle word game and was open to all UHV students. The event brought together more than 40 participants and took place in person and via Microsoft Teams. Nusayr explained how to create a program and how to build on existing coding to create an application. It was the first time a member of the computer science faculty held a workshop based on a famous app, and he plans to hold other events similar to the first, Nusayr said.

“It was the largest IT event in terms of numbers for a face-to-face event since the start of the pandemic,” Nusayr said. “I wanted to start something that was both new and gave students a sense of belonging to UHV.”

During the workshop, Nusayr reviewed the key elements of a digital application, such as customer or user needs, application design and execution. Participants first played part of the free digital game to find out what the game needs from the user’s perspective. The students then worked together on coding using a software development technique called pair programming, which is an industry standard, Nusayr said. The students worked to understand coding because being able to build on existing code is important in software development, he said. Students also learned how to work in a group environment, an important skill that students have not learned during the pandemic.

“It’s not about making a game, it’s about walking through and showing students the architecture of the software,” Nusayr said. “When our students leave UHV, I don’t want them to be intimidated by real-world software applications. It was a great fun way to introduce students to situations they might encounter as professionals. »

Samuel Egere, a computer science graduate student from UHV, attended the event in person and found the workshop informative. He liked Nusayr’s approach to breaking down the complexity of an application in a way that was easy to understand and didn’t take a lot of time. Egere would like to see more workshops like this offered in the future at the university and maybe even a website or platform for UHV students to share the games they have made.

“It was nice that the workshop was much more relaxed in the sense of learning and how to apply what we learn in the classroom to real-world application,” Egere said. “A workshop like this prepares the mind for the industry on top of the skills we learn in school.”

Nusayr plans to hold more workshops at the university for all UHV students and anyone from the Victoria community who would be interested in attending. For the next workshop, he would like to focus on a more specific topic and have a more in-depth discussion.

“My main objective is to establish a link between academia and industry for our students,” Nusayr said. “I want to help our students be more confident when applying for jobs after college, and this is a fun and engaging way to do it.”

The University of Houston-Victoria, located in the heart of the Coastal Bend region since 1973 in Victoria, Texas, offers courses leading to more than 80 academic programs in Schools of Arts & Sciences; Business Administration; and Education, Health Professions and Human Development. UHV offers face-to-face classes at its Victoria campus, as well as an instructional site in Katy, Texas, and online classes that students can take from anywhere. UHV supports the American Association of State Colleges and Universities’ Opportunities for All initiative to raise awareness of state colleges and universities and the important role they play in providing high-quality education and accessible to an increasingly diverse student population, as well as contributing to regional development. and the economic development of the state.